An Introduction to AC Power

A whole house energy monitor measures the energy used by appliances connected to the house mains. To understand how it does this, it is useful to know something about how appliances interact with the electrical system.

Not all appliances interact with the electricity system in the same way. This article will first discuss resistive loads and how the power they use is calculated. It then goes on to discuss reactive loads, and a bit about non-linear loads. Finally, it will show how we measure the direction of power flow, which is important if energy is generated as well as consumed.

Incandescent light bulbs, kettles, irons, electric water heaters, electric cookers are all quite straightforward. They use all the energy given to them. They are resistive loads which means their current draw is equal to the voltage divided by their resistance (Ohm’s Law). A purely resistive load gives a voltage and current waveform output similar to the following: 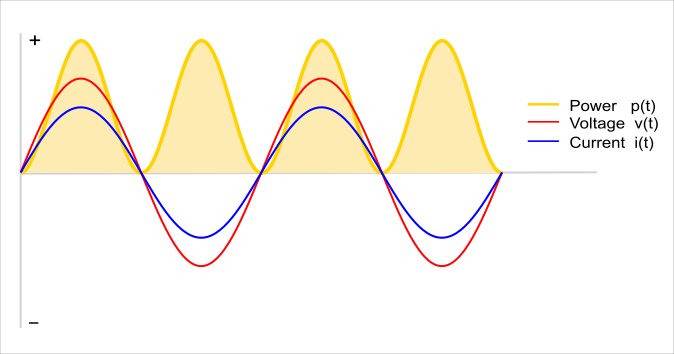 Diagram 1 – Voltage and current phase relationships in a resistive load

The yellow line is power at a given time (at any given instant it’s called instantaneous power) which is equal to the product of the voltage and current at a given time. Notice the power is always positive. In this case, the positive direction is energy flowing to the load.

However things like fridges, washing machines, pillar drills and arc welders are not so straightforward as these appliances take in a certain amount of energy, then release some energy back into the mains supply. These have inductive (e.g. motors) or capacitive (e.g. arc welders) components in addition to the resistive component. A partially inductive load gives a voltage and current waveform output similar to the following: 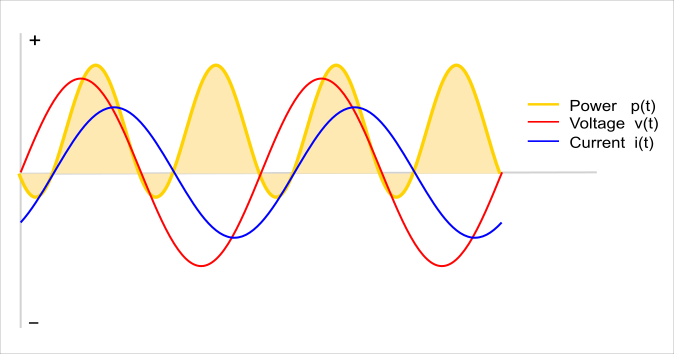 Looking at the voltage, current and power graphs above at mains frequency the power draw fluctuates 50/60 times a second. We can’t keep up with change at this speed, so we have a more useful value for power: the average of the instantaneous power, which we call real or active power.

Reactive or imaginary power, is a measure of the power going back and forth between the load and the supply that does no useful work.

However, a note about non-linear loads:

This power factor relationship is valid only for linear sinusoidal loads. Most power supplies for DC devices like Laptop computers, present a non-linear load to the mains. Their current draw often looks like this: 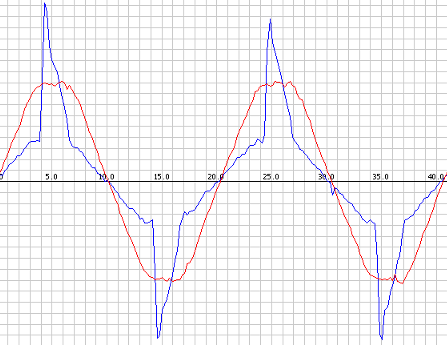 We can still calculate power factor from the following equation:

which is true for pure sine waves, is no longer correct. Neither is power factor = cosΦ, since the effects of higher order harmonics in both voltage and current waveforms must be considered.

The power factor value measures how much the mains efficiency is affected by BOTH phase lag φ AND harmonic content of the input current.

Determining the Direction of Power Flow 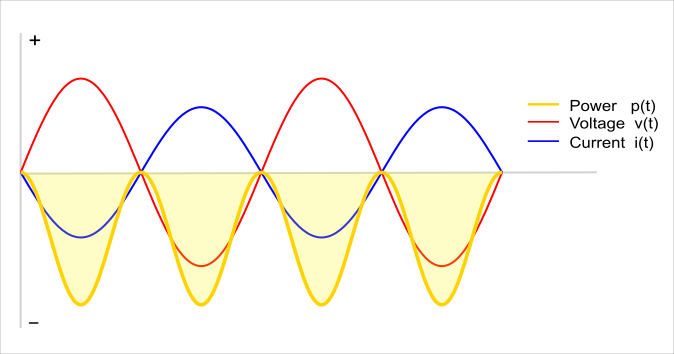 The sign of the power therefore indicates whether power is being consumed or generated.

There are many parameters we can measure regarding energy use in AC systems. Each one has its merits. For the household energy metering, real power is likely to be the most useful value, as it is tells you how much power all your appliances are actually consuming, and it is what the utility bills you for.

Next: AC Power Theory - Arduino maths - How real and apparent power, rms voltage and current, and power factor are calculated.