Pictured below, is an example of a split-core YHDC CT: 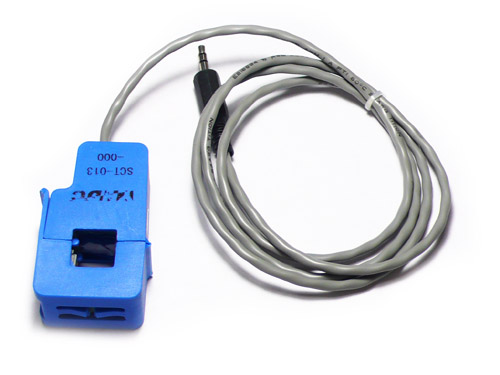 In addition to the split-core type, solid-core, (aka ring-core) CTs are available. Here’s an example of a Magnelab solid-core CT: 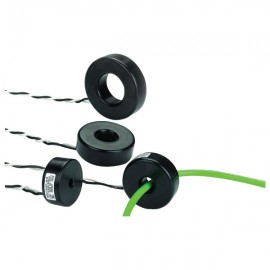 The split core type, such as the CT in the picture above can be clipped onto either the live or neutral wire coming into the building, without the need to do any high voltage electrical work.

Like any other transformer, a current transformer has a primary winding, a magnetic core, and a secondary winding.

In the case of whole building monitoring, the primary winding is the live or neutral wire (NOT both!) coming into the building, that is passed through the opening in the CT. The secondary winding is made of many turns of fine wire housed within the transformer case.

The alternating current flowing in the primary produces a magnetic field in the core, which induces a current in the secondary winding circuit [1].

The current in the secondary winding is proportional to the current flowing in the primary winding:

The secondary circuit is galvanically isolated [2] from the primary circuit. (i.e. it has no metallic contact)

In general, a CT must never be open-circuited once it’s attached to a current-carrying conductor. A CT is potentially dangerous if open-circuited.

If open-circuited with current flowing in the primary, the transformer secondary will attempt to continue driving current into what is effectively an infinite impedance. This will produce a high and potentially dangerous voltage across the secondary [1]

Some CT’s have built-in protection. Some have protective Zener diodes as is the case with the SCT-013-000 recommended for use in this project. If the CT is of the ‘voltage output’ type, it has a built in burden resistor. Thus, it cannot be open-circuited.

The primary winding of the CT is the wire carrying the current you want to measure. If you clip your CT around a two or three core cable that has wires carrying the same current but in opposite directions, the magnetic fields created by the wires will cancel each other, and your CT will have no output. [3] & [4]

A split-core CT, especially one that has a ferrite core (such as the ones made by YHDC) should never be “clamped” to the cable using any sort of packing material, because the brittle nature of the ferrite core means that it might easily be broken, thus destroying the CT. You should only clamp the CT to the cable or busbar if the housing is specifically designed to do so. Similarly, a ring-core CT should never be forced onto a cable that is too large to pass freely through the centre. The position and orientation of the cable within the CT aperture does not affect the output.